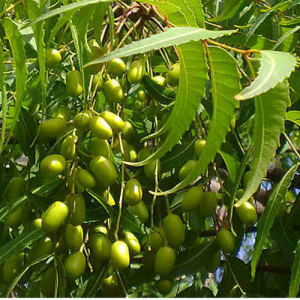 The neem tree produces an amazing range of complex terpenoid compounds, which have been characterized chemically over the last 50 years. In contrast, the biological effects of many of these identified compounds have not been thoroughly explored, although it can be assumed that their primary role is to protect the tree against insect attack. This ability to deter and kill arthropods has been used in Indian village culture since time immemorial to protect both crops and people.

The group of related compounds whose biological action has been very well studied for many years are the azadirachtinoids, of which azadirachtin (A) is the most abundant. They are particularly concentrated in the seed kernels, which are also rich in plant oil.

Traditional Indian medicine considers the extracts of the neem tree as panaceae for a very wide range of ills, but the products available in the UK are generally for external use only. They include:

These are exclusively available through A. Vogel or via a local stockist.

Herbal Insect Repellent
Suitable for anyone, even those with a sensitivity to conventional insect repellents because it doesn’t contain any DEET, a synthetic and potentially toxic ingredient that appears in most repellents.
Neem Shampoo
Neem shampoo contains extracts of neem leaves and helps soothe dry, irritated and flaky scalps.
Neem Cream
Naturally calms & conditions dry, sore, eczema prone skin
Neem Oil
Cold pressed from the fruit and seeds of the Neem tree (Azadirachta indica). It contains compounds known as triglycerides and triterpenoids.