THE POWER OF NEEM 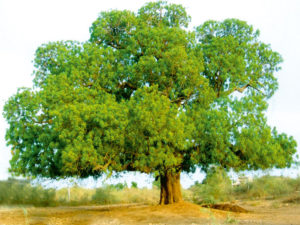 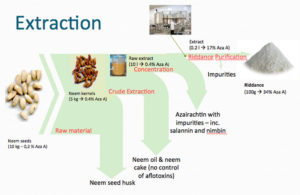 The neem tree (Azadirachta indica) grows widely in Southern India, where it has a considerable role in human medicine, and as a plant protection product.

Due to the increasing interest in non-neurotoxic biological pesticides, it is grown in plantations in: Africa, Myanmar, Thailand, the Caribbean, Central America, China, Australia, and the Pacific Islands.

The tree produces complex terpenoid compounds which have an adverse effect on invertebrates. The most potent of the many terpenoids are the azadirachtinoids.

Not all Neem extracts are the same

NeemCo has world-leading knowledge of the mode of action of azadirachtin – and why there is no effect on mammals.

There are other commercially-produced ‘neem’ compounds but these may not contain the high consistent concentration of azadirachtin (usually called azadirachtin A) which is the defined active ingredient (a.i.) of neem-seed extracts. Some commercial extracts contain other types of terpenoid compounds, which have proven to be toxic to, for instance, fish. For example, neem extracts based on the oil, have low concentrations of the active ingredients.

Additionally many trials in various sectors used azadirachtin extracted using processes that degraded the active and therefore got inconclusive results.

Characteristics as a pesticide

Resistance is a significant issue with neurotoxin based pesticides, such as organophosphates, pyretheroids, and avermectins.

Neem extracts used as commercial biocides and plant protection products for almost 20 years in the USA and EU, and as yet, there have been no reports of signs of resistance in target organisms.